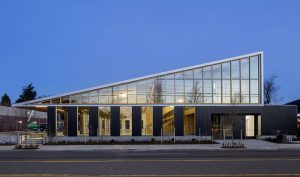 The word is out regarding engineered wood. Strong. Environmentally responsible. Cost-efficient. Known for its natural warmth and aesthetic appeal. These qualities have inspired the work of LEVER Architecture, the Oregon-based practice with a reputation for using wood in new and evocative ways.

“Our approach is equally invested in the meaning behind the material and its sourcing,” says Thomas Robinson, founder and principal at LEVER. The firm’s Flex building, a 19,000-square-foot commercial structure in Portland, uses engineered wood in structural and aesthetic capacities. The focal point is glulam, with the beams made by Rosboro, another Oregon company.

As LEVER’s project manager George Michael Rusch explained: “To start, we think a lot about the materials – and then we look for an opportunity to use those materials in a unique way.”

Once the team thought about the beams, they also chose to make the stairs wood – and to leave exposed the plywood shear walls (from Hardel Mutual, Washington). “We like to use the materials to tie the building together in a cohesive way,” said Rusch. “It’s a real, honest structure.”

Those design choices were also strong budget choices. The 2-foot on center support spacing allowed them to eliminate the blocking on the roof. The prefabrication ability of engineered wood allowed for lower labour costs and increased speed of construction. The construction time on the Flex building was just seven months, and the glulam elements of the building took less than 30 days.